It's like everyone tells a story about themselves inside their own head. Always.
All the time. That story makes you what you are.
We build ourselves out of that story. 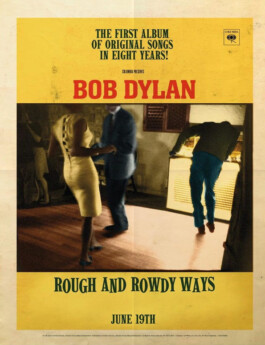 With everything going on in 2020, you could actually miss that Bob Dylan published a new Album, his first since Tempest in 2012. I came by a poster advertising Rough and Rowdy Ways, released on June 19 by Columbia Records. Zipping by on a bike I just took in the title, and the picture on the album sleeve. Some people dancing, one of them leaning into a music box and selecting the next single to play. It looked like something Robert Frank could have done for The Americans. After some digging I found out it was a picture by Ian Berry, born in Lancashire and member of Magnum since 1962. I called him in England and we had a little chat…

Thorsten Wulff: So how are you this fine day?

Ian Berry: I am sitting watching the rain falling. This is England!»

TW: I discovered your picture on the new Bob Dylan album. Can you tell me what happened there, where did you go, how did you take it?

IB: I was doing a story for the Observer Magazine on black people in England. This picture was shot in a night club, quite a long time ago. While the original was black and white, Dylans people coloured it for the cover. It’s not too bad, but it would have been better in black and white. A gallery in New York just called the other day to buy a 16 by 20 print of it.

TW: Quite early in your career you went to South Africa, and worked with fellow photographer Jürgen Schadeberg there?

IB: We worked at a magazine called Drum, Jürgen was my picture editor there. I stayed for about 8 years in South Africa and did two books about my time there before I was banned from the country. I was able to return after Nelson Mandela was released and covered the elections in which he became president.

IB: Cartier-Bresson became my mentor when I joined Magnum, as I was the youngest member then. Now I am the oldest. When I was working with Drum the editor was Tom Hopkinson, who used to be with Picture Post in England before that magazine folded, he introduced me to Magnum in Paris. After I moved to France I started out with another agency there called VISA. Before joining Magnum I had to meet Cartier-Bresson to get his seal of approval. Our first meeting didn’t get on too well, though. At that time the Magnum office was located above a bistro. I brought a load of prints, was a young guy and thought the French drink coffee, which I ordered. Henri ordered tea. I showed him my photographs and he flicked through them. It’s not the British way to flatter people. Cartier-Bresson left and I went up to the Magnum office to talk to the bureau chief. He said: «What did you do to Henri, he hates you!» I told him what happened and he said: «Oh, you did the wrong thing, he doesn’t like to see prints, he wants contact sheets to see how you think!» Another appointment was arranged at the bistro. I took my contacts, ordered tea, told him he was a great photographer, and I was in Magnum! We became friends after that because he was a little bit of an anglophile, so we got on very well.

TW: How was he as a person?

IB: He had a surprising sense of humour, something you don’t always expect from the french. I spent a lot of time walking around in Paris with him. Whenever he went to take a picture I got out of the way, it was an education for me. One day he told me: «If I take one good picture a year I am very happy!» Being a young lad I thought I can take one good picture every day! Later on, of course, I realized he was right. You are doing quite well if you take one good picture a year. He gave me lots of advice like: «Walk very softly, walk very slowly, because if people see you walking by and suddenly you stop, they see you on the periphery of their vision». He was very helpful to me. I was very lucky to be with Magnum at the time when the magazine market was doing so well. I worked for Paris Match, Stern, Geo and Merian. Times, of course, have changed now, it’s a different world.

I left Paris and went back to London, but whenever I was in town I had dinner with Henri and his wife, Martine Franck. Later on in his life, already in his eighties, he claimed to have given up photography for drawing. But after dinner he would quietly take me aside to pull out a few prints, saying: «I shot this last week, what do you think, is it okay?» So he was still shooting pictures while traveling with his wife, who was working as a photographer herself. He was quietly taking pictures on the side while she was on assignment. Even after claiming not to be a photographer anymore he took good pictures.

And he could be quite difficult, the only time I had a slight difference of opinion with him was at an exhibition of George Rodger, one of the founders of Magnum. Henri didn’t like to be photographed, as you know. As he was leaving the exhibition arm in arm with George I went to take a picture. Not recognizing me he protested «No pictures, no pictures!» I replied «I’m not photographing you, you old sod, but George!» And we all had a laugh about that.

TW: What kind of gear do you use these days?

IB: I used Leicas nearly all my life, but some years ago I photographed Rome for Panasonic using their cameras. The model in question was not released yet, and the unit it did not work. There was a video crew to shoot me using the camera, and there was a designer from Panasonic Germany and for five days we all waited in an expensive Roman hotel on the arrival of a guy from Tokyo with a working camera. I shot with it, and it was my first experience with a totally quiet shutter. So after a very good Roman experience I liked to work with those cameras, and back in England I contacted Olympus (because I could use the Micro-4-thirds lenses on the bodies of both makers). So I settled for Olympus bodies with Panasonic Leica lenses like the 25/1,4 right now, just as they sold their camera division.

In the early days I used Nikons for corporate shooting, because if you turned up for the job with a Leica the client would not take you seriously. I used Leicas up to 90mm and beyond that Nikon. Once in monsoon season I had to go to the south of Bangladesh. I took a taxi, then a boat, then a local guy with a motorbike followed by another boat. The guy with the bike said he would wait, but he didn’t. So I had to walk back six miles with three Leicas and a Nikon around my neck. The Leicas are small but quite heavy, so I was very happy when the small and light cameras came out. That being said, the Leica M10 remains very tempting to me.

TW: Did you shoot most of your work in black and white?

TW: Do you keep your film Leicas around?

TW: Do you still keep vintage prints of your work?

IB: Yes. Henri once told me to try his printer in New York, while I was preparing my book on The English. I left the negatives with them and went on assignment. Unfortunately Henri liked to print much softer than I do, I prefer much more contrast. So I got this box of prints and I didn’t like them. I just left them at Magnum in New York and forgot about them. After returning to London I printed the images to my taste. A gallery owner from Hong Kong bought them from me. I shot the images with a couple of Leica MPs he wanted to buy too, but I already committed them to an auction in Vienna. They got sold there, and the gentleman from Hong Kong bought them from the succesful bidder. So he has the complete collection, the cameras and the prints. About five years ago Magnum New York decided to move offices, and while cleaning shop they found this box of prints, a complete set of The English… now I have this complete set of vintage prints to sell, it was very lucky to just leave them in New York!

Ian Berry, thank you for the chat, and see you in England! 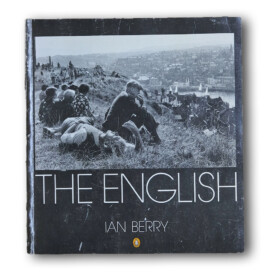